WHAT MAKES A SMART TV DUMB?

Those shiny new smart TV’s. They lure you in, making you drool for the newest in technology. The things you can do – Netflix, YouTube, streaming this, streaming that, connect to the internet. The options are endless. But…what are the odds that we would get two smart TV’s that were both one brick shy of a load?

I’ve renamed them Dumb and Dumber. Dumb had a hairline fracture to the skull that made him fuzzy and distorted. Where was that fantastic picture we were promised? Clear, clean, and beautiful was in the description. Not fuzzy, wobbly, and lines through the images. We should have expected this because when he arrived at our doorstep his packing box had seen better days!

We packed Dumb snuggly and warm back in his shipping cradle and using almost a whole roll of packing tape helped put it in better shape than when he arrived. Six weeks after we place our order he arrived back where he started. He’s probably awaiting surgery as I type. 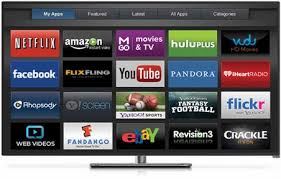 A week later Dumber waltzed in to take Dumb’s place. Bright and shiny new again because – I’m sorry – we didn’t have the time or patience to wait on Dumb to have surgery. Hopefully he will soon find a family and have a place to call home. It wasn’t his fault his shipping cradle had holes!

Dumber’s name says it all. One brick shy of a load…Not the brightest light in the harbor…A few screws short of a hardware store…Not the sharpest knife in the drawer…The gates are down and the lights are flashing, but the train isn’t coming… Well, you get it don’t you? I’m not sure he does.

Dumber has no idea how to connect to the network. Heck! He can’t even find any network, not even his own! After positioning him in three different places, multiple SSID and password entry’s, three lengthy phone calls and twenty-four hours later we have given up the thought he might improve with age.

It’s off to the warehouse hospital for you Dumber. Your twin brother is awaiting a reunion! Third time’s the charm. Hopefully they weren’t triplets.

Elle Knowles lives in the Florida Panhandle with her husband and off-at-college-most-of-the-time son. She has four daughters, one son, and eleven beautiful grandchildren. 'Crossing the Line' is her first novel. The sequel 'What Line' is a work in progress. Recently published is Coffee-Drunk Or Blind - a nonfiction story of homesteading in the Alaska wilderness with her parents and four siblings, told through letters by her mother and remembered accounts from the family.
View all posts by Elle Knowles »
← How to Easily Get Your Blog Found on Google
3 EASY WAYS TO ENSURE TRAFFIC CONTINUALLY FLOWS THROUGH YOUR SITE →