I had to pay to get in. Gone are the times I could walk in as a chaperone, slipping through the gate, sporting the bands logo. I don’t mind though. Those band parents work hard for money to support their school’s music program.

I’ve forgotten how hot it can be at marching festivals. My memory is clearing. There is no breeze what-so-ever. Of course it can be cold too. I can remember the times we had to have hand warmers in our pockets to keep from freezing and hot coffee and hot chocolate could be purchased at the concession.

The restrooms – or lack of in this case – were disappointing. There were three stalls of which one was not in working order, no ventilation, not even a small window, and no mirror. The latter was not a problem. At this point I didn’t really want to see what I looked like, and any lipstick applied would melt off quickly in this heat. Sharing these facilities with seventeen marching bands and spectators was not pleasant. 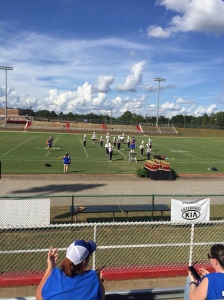 Smallest band on the field – 14 members 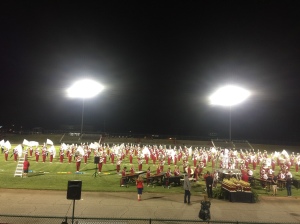 Largest band on the field – 300+ members

When Amie was in band and Jessie was little I would bring a supply of coloring books, crayons, and pencils to keep her entertained. She was happy as a clam sitting under my legs on those nasty cement bleachers doing artwork and eating popcorn.

Fried Oreo’s must have been the featured sweet of the day because they were constantly plugging them. I don’t know about you, but Oreo’s fried in hot grease does not sound appetizing. 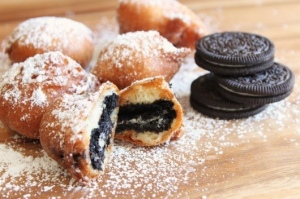 Fried Oreos Not my cup of tea!

After the long hot day, and a two hour drive home, I’ve come to the conclusion that watching marching bands compete is not nearly exciting as when you have one of your own in the ranks…

Elle Knowles lives in the Florida Panhandle with her husband and off-at-college-most-of-the-time son. She has four daughters, one son, and eleven beautiful grandchildren. 'Crossing the Line' is her first novel. The sequel 'What Line' is a work in progress. Recently published is Coffee-Drunk Or Blind - a nonfiction story of homesteading in the Alaska wilderness with her parents and four siblings, told through letters by her mother and remembered accounts from the family.
View all posts by Elle Knowles »
← Full House
Weathering The Storm →