The bad weather notification or amber alert on my phone seems to go off with emergency alerts at the most inconvenient times – like while I’m sleeping at three am. But then again, when is an emergency ever convienient? I’ve been tempted to disengage the notifications at times because those so-called emergencies usually never come to light.

Tuesday night we went to bed with rain coming down in torrents and Tropical Storm Cindy beating a path to our doorway. We were hoping not though.

My phone was continually going off with flash flood warnings and amber alerts most of the night, which I mostly ignored. Finally around 6:20 I picked up my phone tempted to fling it across the room, but instead squinted down at a tornado alert. I had a fleeting thought of running for cover – but where? As I’ve said before this house is like a bomb shelter. We should be safe – if there really is a tornado. I put the phone down and drifted off to sleep. Sleep had not been restful with all the bells and whistles the whole night long. Of course the first thing I did,  and most of us do when we wake up, was reach for my phone and scroll through Facebook. Most of my local news comes from Facebook.

It seems Tropical Storm Cindy had made herself known here in the panhandle of Florida. We knew there would be a lot of rain and a lot of wind. What we didn’t know was there may be some damage – and a tornado! Seriously, I never heard a thing after I disregarded the alert on my phone. I told you we lived in what seems a bomb shelter at times!

Yep…I should have paid attention to my alerts! When H came in from picking up some limbs in the yard I told him there had been a tornado – behind our house – in Ferry Park. Our back yard backs up the creek and to Ferry Park. We were lucky. Most of the damage was on the other side of the park. 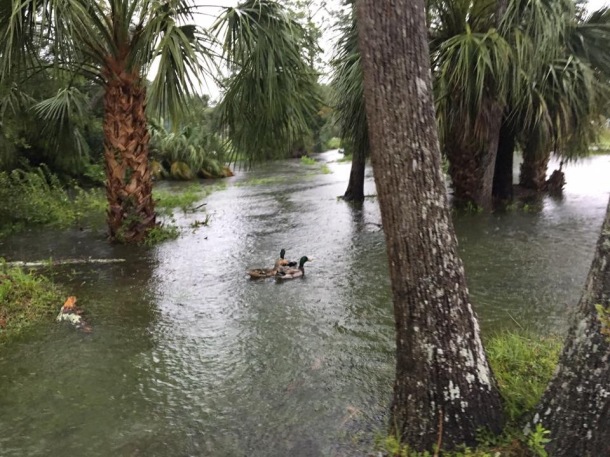 So off we went in the truck, in the rain, to survey the damage – along with a lot of other people from around town, doing the same. I couldn’t get good pictures with the rain pouring down but there are some in a link on this article.

I guess I won’t be disengaging those notifications any time soon. That doesn’t mean I’ll pay closer attention to them though.

SIT AND ENJOY YOUR LOCAL AND NOT-SO-LOCAL NEWS

Rushing to get out of the house this morning for a drive to Destin, I took a few minutes to catch up on the news of the day, but… with my newspaper laying unopened and rejected beside me I picked up my phone and tapped the Facebook icon.

There it was at my fingertips and scrolling was  fast and simple. No turning pages or flipping to another to catch the end of the story and no smudged fingertips from the newsprint.

This sweet little picture was my front page news today! My news of the day has Facebook written all over it. Is this what the world is coming to? I even LIKE our local newspapers Facebook page so I am kept up-to-date with what’s happening around town as I scroll.

I haven’t a minute to spare this summer as most of you can see by the irratic postings in my blog the last few weeks. It’s hit and miss and mostly miss!

And by miss I do miss my daily posting and catching up on blogs I read, but life happens and hits you full in the face sometimes as it has me this summer.

The plus side of this irregular schedule is we may accomplish a few of the tasks on our to-do list before H starts back to work for his last year before retirement.

Hope you have a wonderful newsworthy day!